Bloggers or as I call them “interesting dealers” can’t help it.

This is something that I found to be true with the top bloggers on the internet. It took me several months to realize this after researching the top blogs in 2012 for the International Blogger Championship Tournament #IBCT. However, a theory without proof is like an idea without action so I had to do more. I decided to interact with a handful of the top bloggers to prove my idea and well, here’s what I discovered:

Yeah, I know. This doesn’t sound right does it? It should be the other way around right? You would think the up and coming bloggers are supposed to be writing about the top bloggers, right? Not so fast as Lee Corso would say. What I found was the top bloggers are on top for a handful of reasons here’s two:

This is what drives their success. Just like pollen drives bees.

So, how do you get a top blogger to write about you? 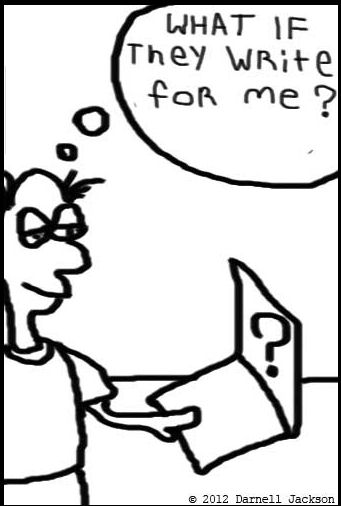 Part of my research was to stay updated on what the top bloggers were doing so I followed them on twitter, subscribed to their email lists, and basically just stayed active on their blogs.

If they posted something that I found interesting I would comment but I didn’t SWARM all of their posts or SPAM them with useless gratitude’s. I just stayed focused on the topic of discussion and tried to add value whenever I commented.

I would also share their articles on twitter and Google+. One of the techniques I found to get their attention is to be the first to share a post on social media. If an article has 25 re-tweets but no one has shared it on Google+ I would try to be the first to do so. Trust me bloggers know who shares their stuff.

Also, if they offered any free eBooks or downloads I would read every single word of their free stuff and watch all their videos. I would also buy their premium products whenever possible.

Unfortunately most people don’t take action and even less people think BIG. This is the BULK HEAD that traps people inside the sinking ship of failure. If you don’t take action how are you going to accomplish anything?

In a short matter of months I focused all my energy on becoming as prolific a writer as possible.

I wrote over 300 articles in 2012 for my own blogs covering hot topics like a spicy Mariana sauce. Some controversial rants, some comedic, and some completely brand new ideas like the #IBCT which introduces a concept I called competitive-comparative analysis.

I also published 3 ClickBank products of my own and offered free eBooks and video training courses.

By the time I was done with half of this stuff most of the top bloggers I followed knew who I was and many of them had followed me on twitter and added me to their circles on Google+.

I’m not sure which cliché I should use to say this. Is it, “watch out for what you wish for” or “say it and it will be done?” Maybe it’s both?

No, it wasn’t that easy but basically that’s all it took once I had positioned my self where I knew the top bloggers would recognize me. However, it didn’t all go that smoothly.

It was the feedback that I got from their REJECTION that helped me better prepare how to approach the bloggers at the top. I can’t stress how important strategy is, it’s not about checkers folks, it’s ALL ABOUT chess. There is a HUGE difference.

So, what’s next? Is it time to forget about guest posting?

No way, I won’t forget about guest posting as obviously you’re reading this guest post but I also won’t forget the fact that top bloggers were writing about me before I ever got my first guest post published. I don’t say this to brag like a schmuck but to motivate you to think outside the box as you contemplate your next move for 2013. As they say where I’m from “Study long, study wrong.” My advise, don’t wait think GREAT and act today if you believe then you will ascend to greatness which is your only true potential. Reach higher and let your actions communicate your intentions this is what the top bloggers do and it’s also what they’ll notice AND write about.

Darnell Jackson is the founder of Darnell is the creator of the #IBCT International Blogger Championship Tournament which features the top 64 blogs worldwide in a competitive comparative analysis.

33 thoughts on “Forget Guest posting? 3 ways to get top Bloggers to write about YOU”