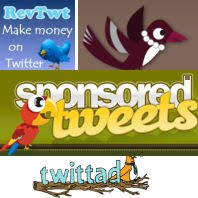 Early adopters of Twitter, no longer think of it as just a personal networking tool or something that we all use to answer the “What are you doing” question. Most people on Twitter are using it as something that can provide real value for their business. Like Facebook, Twitter is also moving into the business mainstream. This is particularly true when Twitter themselves launches their own guidelines and best practices for doing business on Twitter.

While some of you may think that this is not good for the Twitterverse, truth is that many are using it for business purposes or simply put, to make money online. If you are new to Twitter and no nothing about how it works or want to learn more, a good place to start will be to read the Twitter 101 – Special Guide To Twitter For Business.

If you already familiar with Twitter, you will see that most of the Tweets contain links. Such links will most likely be shortened and will direct you to specific pages on the web. Whether it is a blog post, landing pages, affiliate links, etc., using Twitter as a means to promote something that can earn some revenue, is what this post is all about, provided you do it properly and responsibly. Properly means to respect your community (your followers), by providing something of value (even if it is an ad) and not sending several Tweets, over and over again, simply to sell some crap. Pay particular attention to the frequency that you are Tweeting and do not use the “automatic” feature of any business model no matter what. Screen the ads yourself first and then decide. Above all, do not SPAM. By repeatedly tweeting the same message you are violating Twitter’s spam rules, and you could get your Twitter account suspended. Doing all this will provide an insurance that you do not hurt your reputation and cause people to block your Tweets or simply unfollow you.

That said, here are some of the most popular models (or most talked about), launched in the past few months that attempt to help Twitter users to make money with Twitter.

Magpie – One of the first ones in the sphere. Inserts tweets from advertisers into your Twitter stream. You can set it up on automatic (do not) or for manual approval (use this instead). There are no major requirements provided having a valid Twitter account as most ads are per lead or per sale basis. They pay through paypal once minimum of 50$ is attained.

Twittad – Inserts sponsors messages into your Twitter background. Probably the less aggressive one on Twitter. What Twittad does is that they use your profile background to place the ads. This is less annoying as it is not usual to visit a Twitter users background often. If you are like me and use Tweetdeck or any other Twitter client, it is most likely that you will occasionally visit someone’s profile background on Twitter.

RevTwt – RevTwt gives a Twitter user links to post on your Twitter account. You earn money each time someone clicks on that link. It is sort of a PPC for Twitter. This model is less aggressive as you get to pick your own ads. The problem is that some advertisers sometimes have too much requirements (such as minimum number of followers, geo location, etc) and therefore not so easy to get ones that are worthwhile. They also have a referral program where you can earn 20% commission of referred members for life.

Sponsored Tweets – By Izea. Sponsored tweets are just the same as sponsored posts, only this time it will have to be in 140 characters or less:) You set up an account and fix your price per Tweet. Once you are signed up (using the OAUT process), all you have to do is wait for offers and you are good to go. Fixing the price here is the key, so set it up wisely (do not overprice). Just for you to know, if this business model is not good, then why are there so many celebs and a-listers doing there waiting for opps? Some of these people (which I prefer not to disclose) will charge somewhere between 200$ – Call, per tweet!

There you have it. Of course there are other ways to make money using Twitter (affiliate marketing, promoting your own services and products etc), but that will be covered on a later stage.

What say you? Would you use them? Will you follow (or continue following) someone who uses these business models?