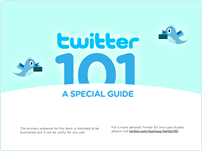 Where do you think would be one of the best sources to learn the lingo on doing business with Twitter? If your answer was iBlogZone, that would be close:), but directly from Twitter.com would be definitely worth the trouble reading.

The official business.twitter.com (twitter.com subdomain) has recently been launched and is packed with information that is a must read for everyone who wants to use Twitter as an effective way to do business. From getting started to learning the lingo, from best practices to case studies, there is a lot to learn and digest from this guide.

To give you an idea, here are some excerpts of what you can expect from this guide:

Every day, millions of people use Twitter to create, discover and share ideas with others. Now, people are turning to Twitter as an effective way to reach out to businesses, too. From local stores to big brands, and from brick-and-mortar to internet-based or service sector, people are finding great value in the connections they make with businesses on Twitter.

One of the cool things about Twitter is that it gives you a way to have friendly, public conversations with customers. You’ll make the most of those casual conversations if you do a little planning first. In this section, we’ll suggest a few strategic things to think about before you dive in, and then we’ll give you some pointers to start twittering smoothly.

On the one hand, Twitter is pretty simple: send and receive short messages. On the other hand, what’s with all the symbols and strange terms? In this section, we explain the weird stuff that’s important so that you can use Twitter like a pro.

Every company has its own experience on Twitter. But whether a business has been here for a couple of years or just a few months, its twitterers tend to find that certain approaches lead to success. In this section, we share that wisdom, which falls into a couple of big categories.

Dell Outlet faces a common but vexing challenge. A division of the giant made-to-order computer business, Dell Outlet carries refurbished equipment and other inventory that it needs to sell quickly. Because the division has to get the word out fast, it doesn’t have the luxury of hiring an agency and developing an ad campaign.

As you can see, this guide prepared by Twitter themselves definitely deserves all Tweeple’s attention. They have also created a simple slide deck version of the Twitter 101 write-up. Download directly the Twitter 101 For Business, if you prefer.

Do you also think that this Special Guide To Twitter For Business, will be soon followed by something else? What say you?

One thought on “Special Guide To Twitter For Business”