The much expected Microsoft’s new search engine denominated BING has recently been released. Visiting their homepage at this moment will return the screen shot as shown on this image.

While several people have appeared to have been lucky enough to test drive the new search engine, I haven’t. Clicking on “Find Out More” will redirect you to Decision Engine homepage, Microsoft’s pitch I guess. They have a video which you can watch and have an idea of what features lie ahead. At the bottom part, I followed a link that say’s “Why Bing?”. Here you will find a letter of introduction from the Bing Team. Really Bing, they could have thought about a different name. I have just read somewhere that BING may stand for “But It’s Not Google”:) Anyway, the supposedly ugly name is generating a Buzz of it’s own.

Here is the letter: 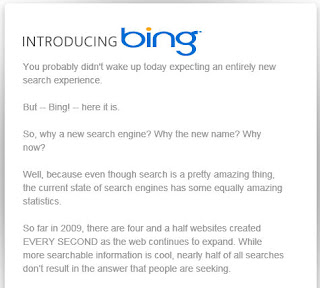 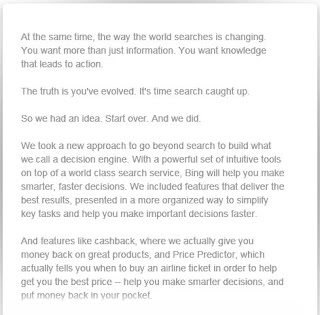 What stroke me most, when reading this letter is this part “And features like cashback, where we actually give you money back on great products”. I would not have been on my niche if I had not noticed this right? Well, I am not sure what this is yet, but I will certainly be vigilant about it and should this be an opportunity for the future, rest assured that you will be given the proper information about it here.

In conclusion, with Google (still King), WolframAlpha, Kosmix and now BING, it seems that the battle has begun, or not? Where you lucky enough to have test driven BING yet? If you did, what do you think about it?