A few months ago, Amazon had said that they will no longer accept referrals from certain sources of traffic. This included Twitter and at that time, Amazon Associates were quite shocked with the news. Today, another breaking news from Amazon was sent to their Associates stating that they have launched a new feature called Share on Twitter. While this is not exactly sharing, it is an attempt from Amazon to further boost its earnings and can help their affiliates to make more money online. Here is a small blurb of the email:

So why can this be good for Amazon Associates:
If you have a good followers base on Twitter, it is most likely that some of them will eventually click on your links. As Amazon states in their email, when a user clicks on these links and buys products you get paid referral fees. Another thing that I really find interesting is that with this feature, it is now very easy to promote Amazon products on Twitter. Just select any product that you think is interesting (maybe some of the best sellers), hover your mouse over the “share on twitter” button located on the site stripe (a management toolbar on top of the page, which you have to be logged in your account to have access to this), click and you be will redirected to Twitter (through OAUT). At this point you can edit the Tweet (if you want) or simply, hit update. Here is an example: 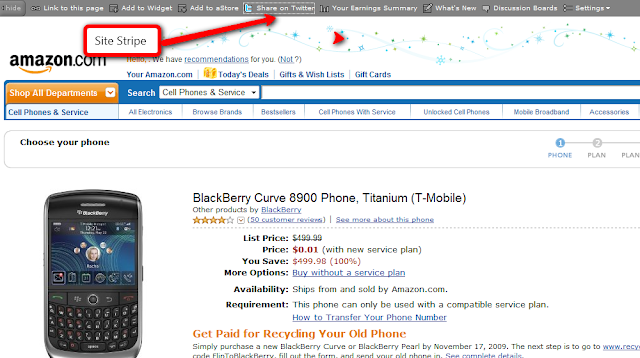 I tried it and it works just fine (see below – oooopppsss just testing guys). Furthermore, it is shortened by bit.ly so it won’t say that it is an affiliate link.

The Dark Side:
While this is good, it can have a negative effect on you and your followers. Some of them might not like the idea of you sending them to buy products so you will have to use this wisely. For example, If you really think that there is a good deal that some of your followers may be interested in, I think it is OK. Also, you should use it sparingly and not bombard your followers with these type of links. For what its worth, set up a different account and send tweets from there. This way you do not run the risk of loosing your followers.

That’s it. If you are not yet an Amazon Associate, you can read the Building Your Own Online Shopping Store With Amazon and find out more about it or read the Amazon FAQ about Social Networking.

So what do think? It this a wise move from Amazon? Do you think that others will follow?

One thought on “Amazon’s Make Money With Twitter Program”