If you haven’t yet heard about it, there has been a very heated “battle” between Thesis developer Chris Pearson and WordPress headed by Matt Mullenweg. Before anything else, the reason why I am writing about this is because I am a Thesis user and an affiliate, while at the same time running it over the WordPress platform (no options there). I think that there is an important lesson to learn from it and so I decided to share about this here as well.

The Problem
The basic issue that Chris and Matt were clashing about is that the Thesis license agreement appeared to be in violation with the WordPress GPL license. GPL or General Public License, states that “software can be sold commercially but the user must be free to share the software, free to modify it, free to redistribute it to the community and free to share copies of his modified versions.” Now, obviously from a business standpoint, that is though to swallow for Chris as it could hurt his revenues.

The News About The Battle
I first found out about this on Chris Cree’s blog Success Creeations. Having read what he had to say about it, I searched for more information and landed on TechCrunch’s blog post that mentions the end result about the face off between Chris Pearson and Matt Wullenweg. As it appears, Chris Pearson has backed out, from his original point of view about the GPL violation and has now made Thesis available under a so called “Split GPL”. Split GPL apparently will allow some parts of Thesis code to be freely shared. How this will affect current Thesis users or the WordPress community still remains unknown to me at this time, although Chris Pearson said that there is no implications for 99.9% of its users. Do any of you know what that means? 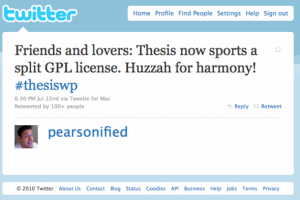 The Face Off
Below you will find the hot interview that Andrew Warner conducted between the protagonist of both Thesis and WordPress. I warn you though that this is a very long interview and if you have already heard about this hulabahloo or seen it, you may want to skip on it. I have viewed it all the way and I was surprised about how both Chris (angry) and Matt (calm) handled this issue.

To make things worst, Copyblogger Brian Clark’s decision on leaving DIYThemes/Thesis Theme obviously has triggered an important issue about Thesis’s future. As you all know, Brian has spearheaded the all important marketing of the Thesis Theme.

The Conclusion
Chris Pearson appeared to have satisfied Matt Wullenweg and the WordPress community by making Thesis partially available. His decision clearly is an attempt to avoid a legal battle in the making. If you ask me, I think that it was a wise decision, although this could have shaken a little his credibility. On the other hand, it may have given Chris Pearson an added motivation to further enhance Thesis functionality and take advantage of all this fuzz. Where all this will end, I still don’t know, but I am convinced that it does not stop here. We’ll see.

Anyway, do you think that this decision will be more favorable for the Thesis users, as WordPress developers can now dig in and provide fixes that would make the Theme more compatible to current and future WordPress versions? Do you think that this will hurt Chris Pearson’s revenue and his motivation to further improve his theme? What do you think will happen (if any) to other WordPress Premium theme developers? And BTW, did you figure out what lesson I learned about all this?

19 thoughts on “The Battle Between Thesis And WordPress”