After weeks of hard work and patiently waiting for the final results, Hesham of FamousBloggers finally announced the winners of the Internet Marketing Blogging contest he recently organized. I am so happy to know, despite the “close race” between the contestants, that I managed to win it, and along with the obvious reward, I must say that I have found so many advantages to have participated in this contest, that quite frankly, I don’t even know where to start. This is the first time I actually participated in a contest as most of the time, I prefer to be a sponsor.

Anyway, I will lay out the most important things (positive and negative) I learned, and explain within a certain context, why this venture is very similar to achieving results in your online endeavors. Note that the advantages are not limited to just the participants, but for everyone involved (more on that later).

To all the participants, sponsors, supporters, the winners and specially Hesham (the host and organizer), thanks! This was a remarkable event and one that would have not been possible without everyone’s active participation. I would also like to thank all those who have supported me during this contest. Special thanks to Ileane and Holly (Blogging Survival Winner), for staying there up to the last minute :). Also, congrats to Jane Sheeba, Sandipan Mukherjee, Danielle McGaw and Ana Hoffman.

The Formula For Winning?

This is the secret… “I was determined to win and never thought of quitting”.. nothing else!

And with this determination, I set out the plan of what I needed to do, to make it so. Here’s what I did…

1) Read and understood the rules to its fullest. I had some doubts with the “reviews” and the “type of links” I could use (aff link for example), so I sent Hesham an email and he responded promptly.

Lesson: When in doubt, ask.

2) Wrote and submitted my entry, in addition to creating a “how to” type video tutorial embedded in the article. As soon as it was published, I had 15 days to promote it and obtain as much shares and comments as possible. They counted for points.

While the support that I got during the 15 days of promotion was more than I expected, it was not enough in comparison to my fellow “competitors”. 15 days later, the promotion was locked and no additional points counted.

3) This is an important part. I started to “monitor” my competitors and see what was going on. Fortunately this was a bit easier due to Heshams real time results (CompResult). In addition, I followed Kristi’s technique of monitoring the results via a simple spreadsheet and started to “map” my offense to level the playing field. 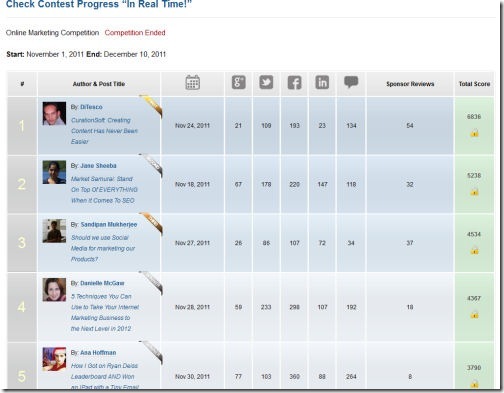 4) Finally, and by carefully “monitoring” the results, I figured that the only way I could get ahead is by writing sponsor reviews (remember the rules). This is where I started to go crazy.. Just wrote lots of it and again, simulated the results using the spreadsheet above. In addition, I was carefully watching what the top contestants where doing. I said to myself, if you write “twice” as much, perhaps you can have a fighting chance and achieve better results. Ultimately, that’s what happened. Just look at the top five and see that they all written reviews. I was actually surprised that “other” contestants decided not to do so.

As I mentioned before, let’s take the obvious out of the way…

1) May not mean much to you, but I proved to myself that if you are really “determined” and take action, the chances of success are multiplied many times over. Whatever you want to do or accomplish, apply the same motivation and determination and GO FOR IT! It is the only way that you can make things happen. Don’t quit!

2) For Hesham, the host and organizer, the exposure was massive and while it may not have been the primary objective, the amount of “backlinks” his website got was tremendous. As far as social engagement is concerned, there are simply way over a thousand links pointing to his website. Need I say more?

3) In incognito mode, Google for the term “Curationsoft Review” and the results are awesome. While there may not be a lot of people searching for the software (yet), I am convinced that in a matter of time, things may change, considering that the topic of content curation is getting a lot of attention. 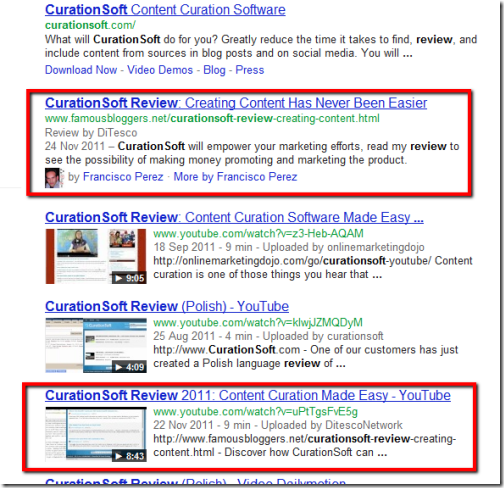 Results: Great for SEO. My post and the video I uploaded on YouTube are getting a lot of attention from Google. In addition, I have actually sold four Pro Versions of the software during the contest. Not much I know, but the fact that “the rules” allowed for affiliate links, getting this much visibility can have an extra benefit. Plus, the entry has backlinks to my site :).

4) The sponsors – I think the sponsors are satisfied with the results. A total of 149 reviews were written and all of the reviews had at least two backlinks to their site. In addition, all contestant had to write a blog post about the contest, and obligatory links to the sponsors. All in all, I believe they had a good return for their generous offers.

5) Last but not least, the contestants. In my opinion, everyone won. The contestants got exposure and were able to take advantage of Hesham’s blog visibility. I met a few people that I have not stumbled upon before and that opened for an opportunity to build relationships in the future.

As you can see, a blogging contest is almost the same as blogging or guest posting. The advantages are there for your taking. The most important part of all this, is to answer a simple question – how determined are you to succeed?

Obviously not everything is a contest, but in essence, if you are doing some form of business online, it eventually ends up in some sort of “friendly competition” and taking action to make things happen… “Those who do, will.. and those who don’t, will not…. “ And for the record, now that I have won the contest, I am ready to look into flights to New York and book it ASAP :).

Brankica wrote a post recently and she ends the article with this message:

Don’t just read about it, don’t just plan to do something,
don’t just dream about something – DO IT!

It is with this mindset that everyone should be facing the challenges of 2012.

That’s it! BTW, and off topic, you may have noticed that “Speedlink” is on a small hiatus. It will be back on 2012.

Thank you all once again for being supportive and here’s to a wonderful new year and to your success.

27 thoughts on “The Hidden Advantages Of A Blogging Contest”